By Ian Townsend for Earshot 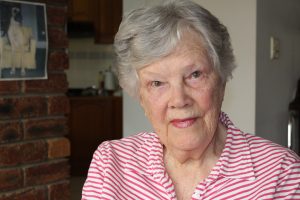 PHOTO: Diana Martell was forced to leave her father and uncle behind in Rabaul. (ABC RN: Ian Townsend)

While Kokoda continues to loom large in the minds of Australians, Rabaul hardly resonates. But relatives of the nearly 2,000 Australian soldiers and civilians who were left behind when Japan invaded the island of New Britain have not forgotten what happened in 1942. At the time, New Guinea was an Australian territory, and Rabaul was an important town filled with Australian soldiers, officials and planters. Its fall may have been Australia’s biggest military and civilian disaster of World War II, so why isn’t it discussed today?

‘The battle for Australia has commenced’

When Australia declared war on Japan in December 1941, after Japan attacked Pearl Harbor, Diana Martell walked with her father and uncle down to the beach in front of their home, just outside Rabaul.

“It was just dawn, grey light, and I remember thinking ‘this was very strange,’ and they were talking and you could sort of feel that something terrible was happening,” she said.

Within weeks, Diana and her mother were evacuated to Sydney. Six weeks later, on January 23, 1942, Japan invaded Rabaul, and within six months Diana’s father, uncle, and most of the nearly 2,000 Australian soldiers and civilians who had been left behind were dead. Thousands of New Guineans, Chinese and people of other nationalities would also die as a result of the invasion.

“The battle for Australia has commenced,” the acting prime minister and minister for the army, Frank Forde, told the nation during an emergency national broadcast on January 24, 1942, the day after the invasion of Rabaul. “For the first time in her history, an attack has been launched against her territory, for the first time her soil has been violated.”

This year, 75 years since all the dreadful events of 1942 and 100 years since 1917, there has been a procession of war anniversaries, all vying for a place in the nation’s memory. There have been national commemorations for the fall of Singapore and the bombing of Darwin. But the fall of Rabaul was marked only by a few quiet ceremonies, attended mostly by families. So why has this national disaster never been part of the nation’s story?

Part of the reason seems to be that many of the survivors remain so traumatised by what happened that they can hardly talk about it.

Graham Manson remembers, but finds it almost impossible to speak about. Now in his mid-90s, he lost his sister, brother, brother-in-law and 11- year-old nephew.

“The last time I saw Dickie, he would have only been, I don’t know, eight or nine,” Mr Manson said, turning the page of a photo album, at his home in Sydney. “That’s Dickie in a cowboy suit. He’s a beautiful little boy.”

Dickie lived with his family on a plantation near the town. They all vanished after the invasion.

“The word we got in the end was they’d all been … assassinated.” 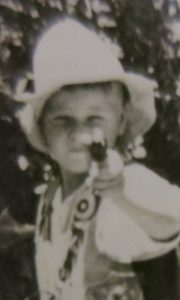 PHOTO: Dickie in his cowboy uniform in the 1930s. (Supplied: Manson family)

In 1943, Mr Manson’s father, still waiting for word, died of a heart attack, and his mother later took her own life. Today, he can’t talk about Rabaul without crying.

Australia ashamed by defeat on own territory

The story of Rabaul is also difficult to explain today, because many Australians have a poor understanding of our shared history with Papua New Guinea.

Australia was given a mandate to administer New Guinea as its territory after World War I. For most of the two decades between the wars, Rabaul was its Australian capital. It looked a lot like a Queensland town, with high-set wooden homes and wide verandahs, red roofs and gardens of frangipani and bougainvillea. Australian businessmen, public servants and planters walked the wide, shady streets in white suits and stopped at the pubs to drink Australian beer. It had a racetrack, picture theatres, and an Australian school. Its residents were listed in the Queensland Post Office Directory.

Just before Japan invaded in 1942, all contact was lost.

The high death toll, the psychological trauma of those who survived, the shame of defeat on our own territory, and government censorship, meant the nation never really talked about it. The women and children evacuated before the invasion became refugees in their own country.

“They were told not to discuss where they had come from because it would cause angst within Australia,” said Andrea Williams, Diana’s niece, and a member of the Papua New Guinea Association of Australia

Call to recognise those who ‘vanished’

The survivors of the invasion of Rabaul are still looking for answers. The civilian men were not given the option of leaving. At least 1,200 Australian soldiers and civilians died in the six months following the invasion.

Some were killed in the battles, others died in the jungle, 160 were massacred at a plantation called Tol, and more than 1,000 military and civilian prisoners from Rabaul drowned when the prison ship Montevideo Maru was sunk by an American submarine off the Philippines. Many other civilians, like Mr Manson’s family, simply vanished.

“They just disappeared,” Ms Williams said. “One of the things about the civilians in Rabaul is that their names are nowhere, and to me that means they don’t exist. You’ve got to put the name somewhere and recognise that these people actually existed … Whether they died in Rabaul, on the Montevideo Maru, at Tol or somewhere else, they died as tragedy of war.”

Today Graham has nowhere to grieve for his lost family. Recent research revealed the family, including Dickie, were executed for spying. But their names are listed on no memorials and the nation doesn’t remember. Even the end of the war in 1945 brought no end to the suffering of Mr Manson’s family.

“I remember all the people were cheering in the streets,” he said. “But Mum had been praying every day. She kept saying, ‘Where’s my family?’ We never ever heard through the whole war, and the most heartbreaking thing was … when peace was declared we waited and waited and waited.”

Having been to Rabaul a few times, prior to the 1994 Volcano eruptions, and in the last couple of years to Kokopo it was not until I read the book by Ian Townsend did I really know how many people died during the war on Rabaul. Especially the horror story of Dickie. I totally agree that everyone in Australia should be informed about the War History of East New Britain. Memorials should have all the names lost in Rabaul, on the Montvideo Maru, Tol and all other places. There would have to be somewhere in archives the names of all those poor souls slaughtered by the Japanese. When I return to Rabaul again I will be saying some quiet prayers while looking out to the volcanos for all those lost and almost forgotten people.