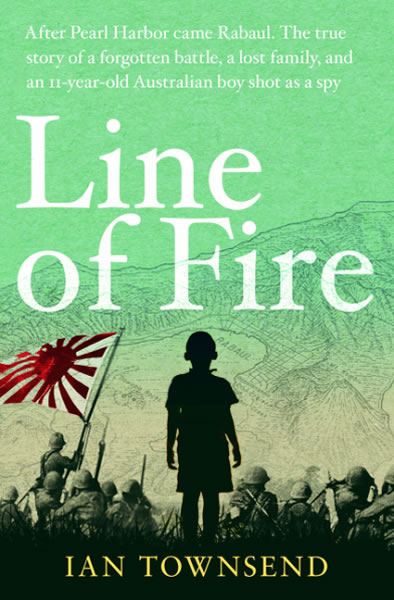 Line of Fire review: extraordinary tale of a little-known tragedy
‘Ian Townsend has done an impressive job of reconstructing this complex and extraordinary story which had been all but forgotten.’
– Sydney Morning Herald.

‘Ian Townsend’s third book, Line of Fire, a work of nonfiction, is excellent … a gripping yarn of espionage and war. The story he tells is as fascinating as it is tragic … One of the many reasons this book is so absorbing is that the multilayered experiences of these five ordinary Australians, executed in Rabaul, are part of Australia’s story and a crucial episode in our military history.’
– The Australian

‘As gripping as a detective novel, Townsend brilliantly evokes the claustrophobic ‘frontier’ life of the times while telling a hitherto little known story … A misadventure of an extraordinary kind.’
– Reader’s Digest

‘“Important” would be one word to describe this book. Also poignant, powerful, absorbing … This is a real life thriller, a piece of history never told before.’
– The Manning Community News

‘Townsend has done an excellent job with his research and readers will find “Line of Fire” hard to put down.’
– Air Force News

Line of Fire tells the little known WWII story of an eleven-year-old Australian schoolboy tried, convicted, and shot as a spy. In 1942, Dickie Manson, holding the hands of his mother, Marjorie, and stepfather, Ted, was executed by the Japanese in Rabaul, New Guinea. Also shot were Dickie’s uncle Jimmy and family friend Bill Parker. Their true story sheds new light on a largely forgotten, but desperate, battle fought on Australian territory weeks before the fall of Singapore and the bombing of Darwin. In January 1942, the Australian Government, unable to reinforce its small garrison at the Australian town of Rabaul, left more than 1500 Australian soldiers and civilians to face of an overwhelming Japanese invasion force. Within six months, most of them were dead.
Ian Townsend has researched this true story to produce a narrative that sheds new light on the Pacific War by looking at one ordinary, but doomed, Australian family. This is a fascinating work of narrative non-fiction, a story of spies, gold, volcanoes, family secrets, military history, and war, set against the romantic, dramatic, and ultimately tragic backdrop of Rabaul in WW2.