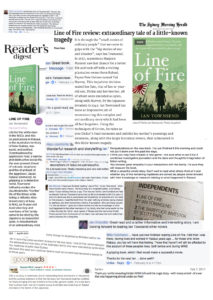 “… brilliantly conceived and superbly written … a must read book … As a powerful mix of truth and invention, it is a literary tour de force.” – Ross Fitzgerald, The Australian.

“… a bona fide page-turner … Townsend is either very lucky or a historically aware, brilliant researcher; perhaps both. He has found that thing often eluded by serious literature: a good story.” – David Messer, The Sydney Morning Herald.

“I love cricket biographies. I love Robert Louis Stevenson, Joseph Conrad, American realists like John Steinbeck, Faulkner, not that he was a realist really. I like Hemingway. And I tell you what, I read Ian Townsend’s book. Now that was fantastic. I really liked that book. Really graceful writing. Really interesting, too. A cracker.” – William McInnes writing in the Adelaide Advertiser.

“Townsend evokes the pungent smells and heavy air of Townsville, takes time to develop the characters whom the plague has thrown together … Affection is an engrossing and skilful debut.”
– The Bulletin’s Books Supplement.

“… a finely crafted novel … there is both humour and pathos here in the broad sweep and the intimate detail.” – Lorien Kaye, The Age.

“Books live and die by word of mouth recommendation… so Brisbane journalist and author Ian Townsend should be happy, because the word on his first novel is all good… a fascinating portrait of the era.” – Phil Brown, Brisbane News.

“… an unusually successful historical novel. Affection could be an excellent book-club suggestion – there is plenty to discuss and it informs as it entertains.” – Tim Coronel, Australian Bookseller & Publisher magazine

“… this is fiction at its dramatic best … By the time the storm strikes, bringing death and destruction with it, I felt I was there in Bathurst Bay experiencing the unstoppable force of Cyclone Mahina … It is history with greater resonance than a text-book.” – The Courier Mail.

“Townsend touches on many of the sticky issues of that era – from racism to mixed race children – and has obviously researched the history and social values meticulously … It’s a pleasurable way to absorb history, and all credit to the author for choosing such an important event to weave his story around. The characters remain with the reader long after the tale is told, and that surely is what good writing is all about.” – ABC Radio.

“Hour by hour the story moves towards the worst cyclone in Australian history. Just when the heat and exhaustion of all concerned are becoming almost overpowering to the reader, the cyclone hits … Breathtaking. Far more chilling than any murder mystery.” – Cairns Sun.

“A fascinating tale of commercial exploitation, inter-racial relationships and a natural disaster. Townsend has done a wonderful job in recreating this terrible event.” – The Examiner, Launceston.

“Townsend follows in (Thea Astley’s) considerable footsteps … (He) draws the force of a cyclone with true authenticity, and the destructive effects on a motley collection of people … Part of the accomplishment of this novel is its use of dialogue, presented without anachronisms, direct as a script, and loaded with covert meaning … The Devil’s Eye is vivid, complex and assured.” – Sunday Age Book of the Week.